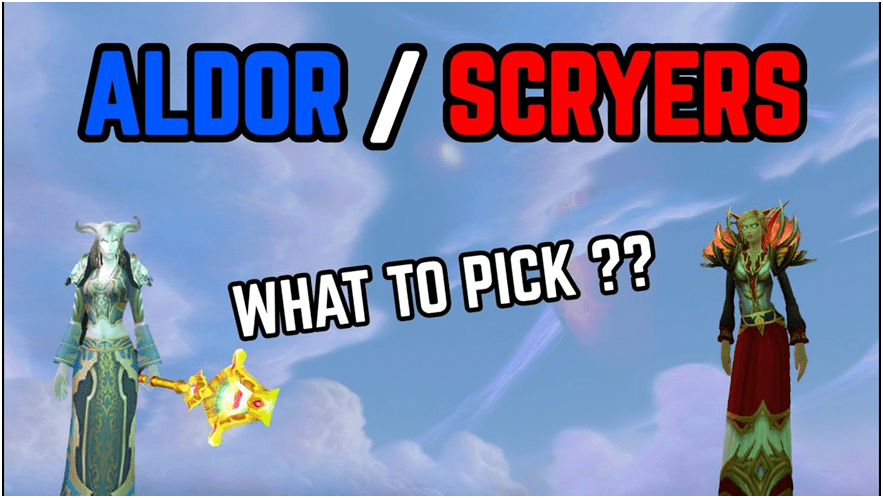 With World of Warcraft BC Classic, you can join the Aldor or the Scryer, two factions that give you strong BoPrewards, and shoulder enchants for professions. In this guide, tells you which faction is better for your class or your profession.

What are Aldor and Scryer in World of Warcraft TBC Classic?

The two factions are based in the new capital Shattrath, the first city shared by the Horde and Alliance:

Aldorsare the Draenei priests and they follow the light and the naaru. Scryers are blood elves who have broken away from Kael’thas and are now fighting him

Both factions offer you some unique, some equal rewards if your reputation increases with them. Since there are differences, the respective factions are better or worse for some classes.

In principle, the following applies: The differences are absolutely minimal. In the end you only get a few percent that one faction is better than the other. So don’t be blinded by pure numbers. If the Scryers are “better”, but if you prefer to play Aldor, then play Aldor. You have no significant disadvantage.

Aldor and Scryer- How to join the Factions?

How to become a Scryeror Aldor: As soon as you travel to Shattrath City at level 60, a gaunt war veteran will give you the quest “A’dal”. For this, you should go to the naaru in the city center and talk to him, whereupon the magician Khadgar gives you another quest.

This quest takes you once through Shattrath. Tip as a shortcut: Just stand up at the Naaru G’eras in the west of the central building. There the tour ends and you complete the quest there as soon as your companion arrives there.

After the introductory quest, you can choose from Khadgar whether you want to join the Scryers or the Aldor. He offers two mutually exclusive quests, each of which gives you 3,500 reputation for the corresponding faction.

Can I only join one political group?

Basically yes, even if it is not possible to join either of the two groups. However, this is not advisable as you will miss out on important benefits including the WoW TBC Classic Gold. Basically, you swear allegiance to the respective faction. Every time you gain a reputation with one faction, you lose that much reputation with the other faction. In other words: the higher your reputation rises with one faction, the more the other despises you and later even attacks you.

Can I change the parliamentary group?

Yes, it is possible to later increase the reputation of the faction that hates you by elaborate grinds and collecting items. You need 1,344 units of certain items from a “hateful” reputation:

Dread poison pouch for the quest “Dwindling Supplies” at Sha’nir in the Lower District. Eyes of haze scale basilisks for the quest “Voren’thal’s Visions” with arcanist Adyria in the lower quarter

Who Should Choose the Aldor?

What classes should be Aldor?

Blacksmiths and leather processors will also find recipes for armor with fire resistance here. The recipes are tied to the faction, but you can also simply buy the manufactured items. Tailors can learn silver and gold magic threads from the Aldor, which increase healing and stamina on pants. The threads are also tradable.

Advantages of the Aldor

The main rewards that the factions offer are enchantments for shoulder parts. You can get the best of them if you have an awesome reputation. With the Aldor you get the following enchants:

In addition, the Aldor will give you some items that are bound when you pick them up for purchase and through quests. Worth mentioning here is a ring with mobility and attack power for close and long-range fighters who rely on mobility.

With the Sun Well in Phase 6, at the very end of BC Classic, there are also additional effects for the neck parts of the Shattered Sun. With the Aldor you get the following effects:

Shattered Sun Pendant of Might: +200 attack power for 10 seconds

Incidentally, the only jewel-cutter teacher is also on Aldor hill. You also get access to some flight points in the world that Scryers cannot use.

Who Should Choose the Scryer?

What classes should be Scryers?

Blacksmiths and leather processors can also find recipes for armor with arcane resistance here. The recipes are tied to the faction, but you can also simply buy the manufactured items. Tailors can learn mystical and rune-adorned magic threads from the Scryers, which increase the magic damage and stamina on pants. Alchemists get a recipe from the Scryers for an elixir of considerable firepower, which increases the damage caused by fire spells. The manufactured items are all tradable.

As with the Aldor, the Scryers’ shoulder enchants are the most important trait for most classes. You get the great enchantments with the awesome reputation:

Greater Inscription of the Oracle: +22 healing and 6 Mana / 5 seconds

Greater Inscription of the Knight: +15 Defense and +10 Dodge

Greater Inscription of the Blade: +15 Critical Strike and +20 Attack Power

A special item that is bound when the Scryers are picked up is the Scryers’ blood jewel, which you can buy with a respectful reputation. The trinket is one of the best in the game for spellcasters, increases your spell hit rating and can be used to increase your spell damage by 150 and healing by 280 for 15 seconds (1 min. 30-sec cooldown).

With the Sun Well in Phase 6, at the very end of BC Classic, there are also additional effects for the neck parts of the Shattered Sun. With the Scryers you get the following effects:

Shattered Sun Pendant of Might: Arcane Strike that deals 333-367 damage

By the way, the only enchanting art teacher is also on the Scryers’ staircase. You also get access to some flight points in the world that Aldor cannot use.

Even if the factions may have some advantages, each class will find something useful in both the Aldor and the Scryers. So don’t let the numbers fool you if you lose your fun.