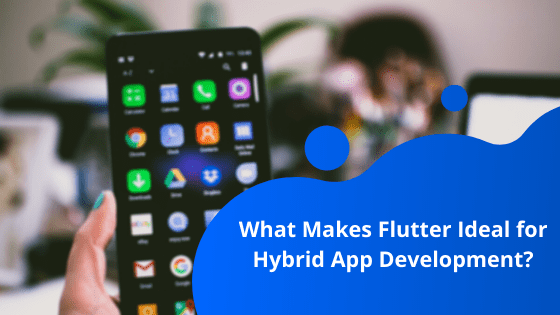 Why is Flutter Ideal for Best Hybrid App Development

Flutter, launched and developed by Google, is an open-source mobile UI (User Interface) framework. With the use of a single codebase, it allows the developers to create exceptional Android and iOS applications.

Thus, we can say that Flutter provides some fantastic hybrid app development services that can be used to get your dream application developed. The advantages of Flutter help build an extremely interactive native interface on Android and iOS in a matter of a few moments only.

It boosts the pace of the entire development process to such an extent that you can reach out to a vast audience and expand your base.Despite what you have read above, there’s more to Flutter. And that’s what we will be discussing in this article. Let’s learn more about Flutter.

Flutter is developed by Google in the form of a multi-platform, open-source mobile SDK to develop mobile apps for multiple platforms such as Android and iOS using a single source code. Along with excellent documentation, use of Dart programming languages, and full support of native features, Flutter doesn’t fail to impress in developing mobile applications.

It also has a robust community that is always there to assist in developing an application using Flutter. Google, along with the community, always try to make advancements in Flutter for betterment.

All these can be considered as the notable features of Flutter that make it worth giving a shot. The Flutter provides all the hybrid app development services that you may ever ask for or need. Let’s take a look at what makes Flutter a good option for hybrid mobile application development.

With so many extraordinary features of Flutter, we can say that it is totally a boon to developers. Here is how it proves to be beneficial for hybrid app development.

The development journey with Flutter becomes even more fun and interesting with the accessibility to native codes, platform APIs, and third-party integrations. Whatever platform you choose, you can easily use the native features and SDKs (Software Development Kits). The programming languages for Android and iOS, such as Kotlin, Swift, etc. can be reused.

An appealing user interface is one of the most important things that a user expects. It always acts as a plus point for the app. Flutter’s features like a set of visual and motion-rich widgets make an application look appealing, interactive, and engaging on all platforms. The apps stay user-friendly and can navigate easily.

Since Flutter provides support for the development of both IOS and Android apps, it is an excellent option for the development of cross-platform applications. Its rendering engine makes it ideal for native app development. Also, developers can not only change the widgets but attempt to build a profoundly engaging native interface as well.

When you change the variable in the state in Flutter, you can change the interface. All the changes can be witnessed in the UI (User Interface). Also, in comparison to other frameworks such as React Native, the application can be set up quickly with no hustle using Flutter.

Flutter takes the responsibility upon itself and ensures that each design component in the app on a specific operating system adheres to the design standards. With Flutter, every element of the application stays updated with the design over all devices or platforms.

We can’t agree more on the fact that Flutter is a fantastic platform assisting with the development of hybrid apps. You can simply hire a hybrid app development agency, and depending upon if Flutter suits your project, you can discuss with the agency about working with Flutter. Make sure the agency is good enough to consider your point of view. Hiring the right agency is extremely essential. Last but not least, the support for Android and iOS in Flutter, along with the use of dart programming languages, is highly appreciated for the development of responsive mobile applications.